15 Registry Items I Am Still Using One Year Later 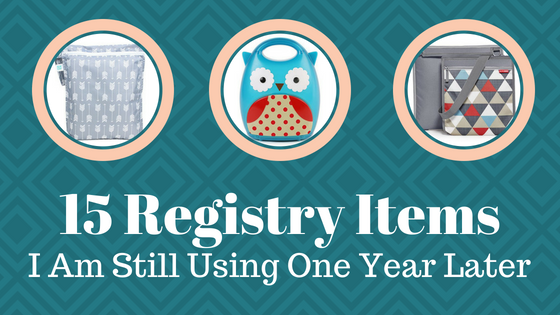 When we were expecting Chulengo, we lived in a small apartment.  So, when we put together our registry, I focused on items that were going to help us out in the long run.  Lucky that I did, because although we have moved since having Chulengo, we are still in an apartment where space is limited.

We have a closet in Chulengo’s room that has become the baby storage space.  This closet is where we put items that we had for Chulengo when he was an infant but no longer need:  a rock n play, 0-9 month clothing, burp clothes, pumping supplies, you get the idea.  They are all things that we may someday need again (I hope), but we just don’t need them or use them right now.

When I look at registry items that we received that I am still using one year later, I get happy.  Those items have been used over and over.  They aren’t tucked away in a closet.

If you are looking for items that you are going to use well over a year, check out this list below.

We chose a monitor that we could pair multiple cameras.  Therefore, we have a camera in Chulengo’s nursery and also one in his playroom.  Because I don’t have a clear, direct view of the playroom from the kitchen, I can quickly glance at the monitor to make sure Chulengo is safe while I am prepping dinner.  We don’t rely on the monitor as much as we did when Chulengo was initially born, but we use it to check on Chulengo without distracting him.

Ok, I admit that I am still using this drying rack in our kitchen, but it is not always for Chulengo’s items.  I use it to dry anything – Tupperware containers, plastic cups, a hand blender blade, chopping knives, you name it.  This is the best drying rack we have ever had.   Now, if I can only get it in a stylish color to match my kitchen.

Chulengo and I are still on our nursing journey together.  Typically, I nurse him in the glider in his nursery.  Being a Physical Therapist, I am very aware of my posture and try to avoid painful or awkward positions.  This can be difficult to do when nursing a squirmy toddler.  Ergonomically, I am most comfortable when I place the boppy underneath him.  He settles in on the boppy and calms down to nurse, while my hands are free and shoulders are relaxed.

Hands-free, cream applicator.  Whoever invented this is a genius.  I have one in the nursery and one in the diaper bag.  One of my favorite registry items of all time.

I think I use the car seat mirror more now than I ever did before.  I can easily check and see if Chulengo is awake, eating a snack, looking out the window, or freaking out.  He has also figured out that he can see me in the mirror.  I can interact with Chulengo without having to turn my head to look behind the seat.  This makes a car ride much more enjoyable for both of us.

I purchased a diaper bag that is black leather.  Why?  Because I knew I would no longer carry a purse on a regular basis.  So I wanted the diaper bag to compliment my outfits and be low profile.  The contents of my diaper bag have certainly changed over the past year, but my bag has been by my side every day.

When I originally saw this night-light, I loved it because it was an owl.  If you know me, I love owls.  Chulengo’s first animal sound was “whooo” for an owl.  But this night-light has come in handy for multiple reasons.  I used it during nighttime diaper changes when Chulengo was first born.  Now, it’s a part of our bedtime routine to keep the room dimly lit.  I also give it to Chulengo now during diaper changes to keep his hands busy and out of his diaper.  In the future, I plan to give to Chulengo this night-light to use when he feels like he needs a little extra light, when in his room by himself.  The best part about this night-light?  It shuts off after 30 minutes because my mom-brain will forget to turn it off.

This thing has been a blessing for those times when Chulengo has been super congested.  Especially, when he got the flu, and the couple of colds that he has had in the past few months.  I especially recommend using a nasal spray first to loosen secretions.  There is something satisfying about seeing what actually comes out of Chulengo’s nose to know it is working.

We have taken this blanket with us to the park, to the beach, to the playground, anywhere outdoors.  It’s durable, easy to clean, easy to fold, and easy to store.  I particularly like this one because it has a little cooler pouch attached for snacks.

Where has this changing pad not gone?  Using this portable pad, we have been able to change Chulengo’s diaper on an airplane, in the trunk of the car, at the park, at the store, you name it.  Anywhere I have been with Chulengo in the last year; this changing pad has come with us.  It’s great to have one space for diapers, wipes, and other diapering accessories.  I usually clip this to the diaper bag, so it is easy to access.

I have used a couple of different sleepsacks through Chulengo’s short life.  Initially, when Chulengo was first born, we used little peapod-like sleepsacks with no armholes.  Chulengo was snug as a bug in the sacks.  He slept very well.  Once he started rolling, we had to use a sleepsack that had armholes.  I preferred the sleepsacks where the arms zipped off so I could slowly transition him to one hand out first.  Then, I would transition to two hands out.  I prefer sleepsacks that close with a zipper for a couple of reasons.  One, they are easy to put on and take off, especially during the middle of the night diaper changes.  Two, they stay snug.  The blankets and velcro swaddles we had would loosen easily or come undone when Chulengo would wiggle around.  While the zippered sacks would stay tight around Chulengo.

Ah, the sound machine.  This is my secret weapon to get Chulengo to go to sleep.  I chose one that has the option to plug into the wall or be battery operated. So, when I am at home, I am not going through a ton of batteries since I can plug it in.  But, I have the option to travel with it easily.

I use our stroller every single day.  Chulengo and I walk every day.  We go to the grocery store, the park, the mall, or around the neighborhood.  Being able to put my wallet, phone, water, Chulengo’s sippy cup within reach is very important.  I hate to rummage through a bag to find small items, so the stroller organizer has really come in handy.

We usually use this bag when I least expect it.  Each time we use it, I am SO glad that we have it.  If we have an explosive diaper while running errands, I can put the dirty diaper and Chulengo’s soiled clothes in the wet bag.  If Chulengo spills food or milk all over his clothes during a meal out, we can change his clothes and put the damp clothing in the wet-dry bag.   I love that I can use this bag to keep dirty or wet items separate from the rest of the stuff in his diaper bag.

So, there you have 15 items that you can continue to use well past the first year of your baby’s life.  Are there any other items you recommend getting to use long term? 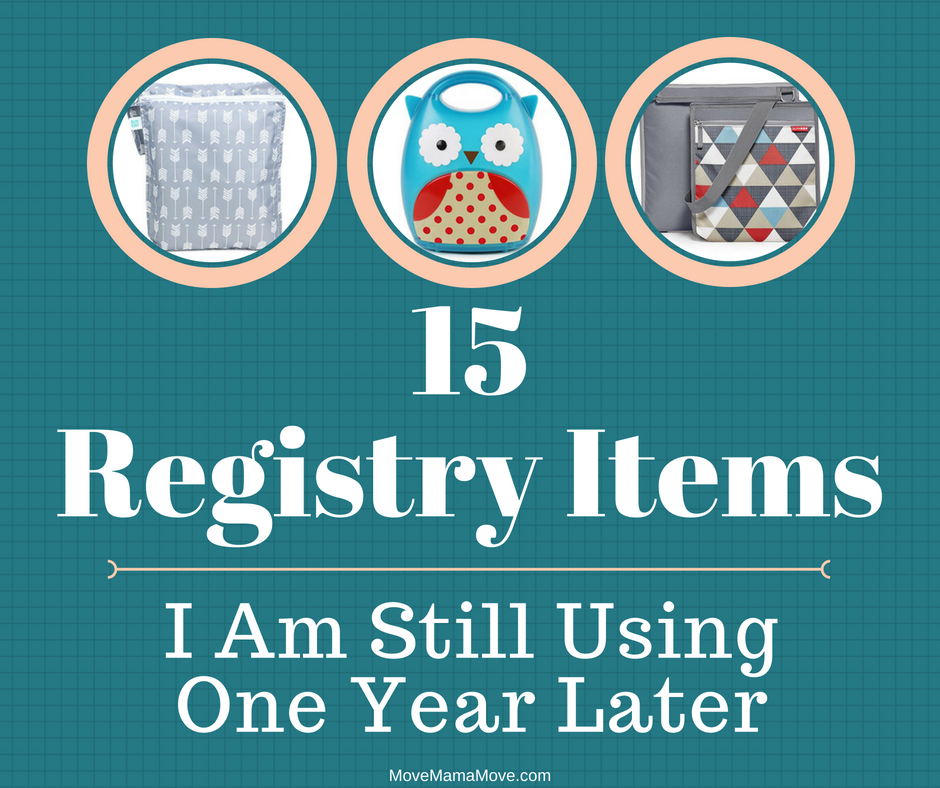 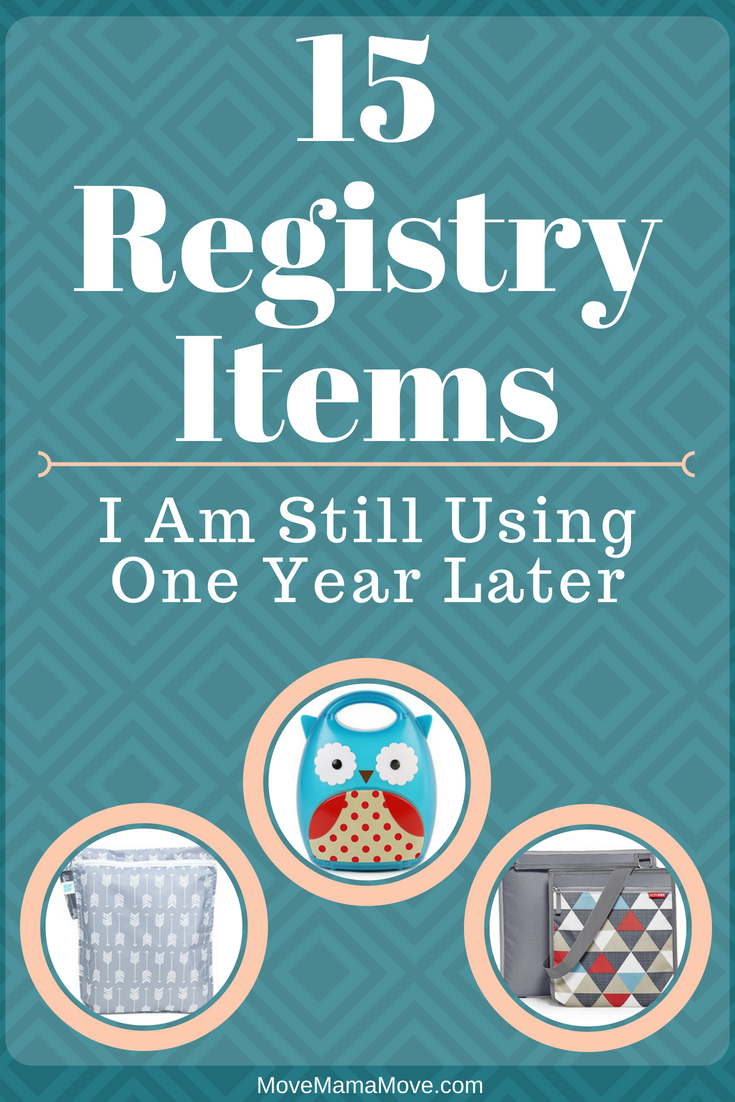