Create an Outer Space-Themed Bedroom Your Toddler Will Love 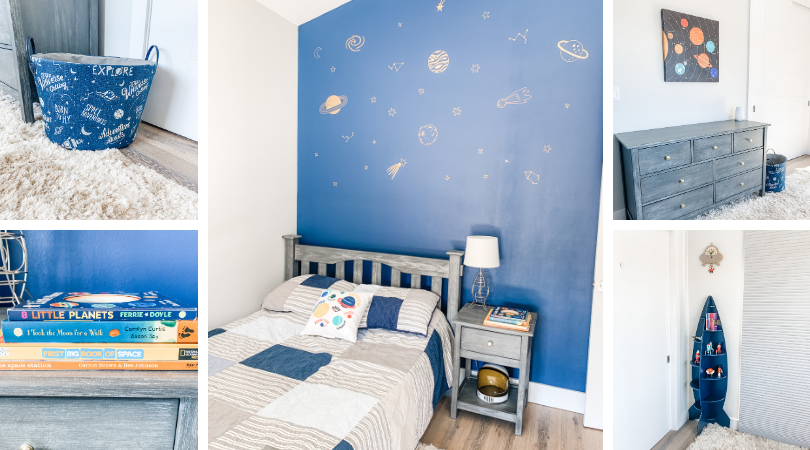 Choosing a theme for Chulengo’s new “big-boy” bedroom was a little bit tough. We decided on an outer space-themed bedroom for three reasons. First, we wanted a room that Chulengo could grow into. Something that he would enjoy now but also appreciate later. And, I don’t want to redecorate every few years if I don’t have to.

Second, we wanted a room that created a calming environment for Chulengo. We already have a hard enough time getting him to chill out for bedtime, so we wanted to avoid any excitement-inducing characters like superheroes or TV characters.

And third, we wanted to create a space (no pun intended) for him that would pique his curiosity. Our generation is at the beginning of major space-related discoveries. Chulengo’s generation is going to take it even a step further. And we would love to cultivate Chulengo’s interest in outer space.

Keep reading to see how we pulled together this outer space-themed room that Chulengo loves.

While this was my favorite project for Chulengo’s new room, I was a bit nervous about painting walls in our house for fear that I wouldn’t like it. Especially navy blue walls. By pairing the navy blue wall with the gold space decals, Chulengo and I fell in love with his space-themed room. It really created a simple focal point that we love. I found these decals on Etsy and love them! We often lay in Chulengo’s bed talking about stars, planets, and comets.

I stumbled upon this hamper by chance while at HomeGoods, and it was the perfect accent for Chulengo’s room. I like that it is short, with handles, and easy for him to carry to the laundry room. I keep on top of laundry because it only holds a couple of days worth of dirty clothing, but I like that. The design is simple yet fits the outer space theme well.

This hamper found on Amazon would compliment the Etsy wall decals really well.

This was the first piece I picked up for Chulengo’s room and really lead to the inspiration for this outer space-themed room. My husband puts Chulengo on top of the dresser to put him into jammies at bedtime. And over time, Chulengo has learned the name of each planet. There are so many great ideas out there for outer space-themed wall art. I’ve found a few on Etsy that really love.

I really love this personalized wall art combo too.

Initially, I picked out an outer space-themed quilt for Chulengo’s bed. But, it was a bit too much. I love the space theme, but I wanted to invest in a quilt that Chulengo could keep for years even if he outgrows the current theme. So, I picked a simple quilt but picked out themed sheets and pillows, which was the perfect touch.

I decided to add space-themed sheets and pillows instead of a themed quilt. I found a few pillows at Target and the rocket ship sheets at Homegoods. While I can’t find a link to the exact set of sheets I bought, one set on Amazon is very similar.

But if you are looking for a space-themed comforter, Target has a great-looking one right now. And Amazon has this one available for Prime shipping

I looked everywhere for a rocketship bookshelf and couldn’t find one I loved. I contemplated building one myself but then came across this one on Amazon. It came in a bright blue, but we re-painted it to match the same navy blue as the accent wall. I’ve put a few books on the shelves in the past but have found Chulengo whttps://movemamamove.com/zgz5ill stay up all night long looking at books if we make them too accessible. So, I now use the space for his rocket blocks, which has worked out well.

I also really love this rocketship bookshelf on Etsy…it looks pretty amazing! And you can customize the color.

I purchased this photo specifically for Chulengo to keep with him as he grows. It is a replica of the night sky, on the night he was born. It is even specific to the city he was born in. I am emotionally attached to this piece of art. I was able to customize the saying, and each time I see it, I tear up just a little bit. It takes me back to the night I held him for the first time. When I stayed up nursing him. When my whole world changed.

I love this lamp. It’s space-themed, but not obnoxious. It is also super easy for Chulengo to turn on and off. I found this one at Target and fell in love with it as soon as I saw it. I went into Target for a birthday card and came out with a lamp… darn it Target, lol.

While the novelty of having an accessible lamp in his room hasn’t quite worn off yet, meaning he likes to turn it on and off and on and off, I love that Chulengo lies in his bed and reads before falling asleep.

I feel like the lamp also gives him ownership of his bedtime routine. It’s dim enough that the ambiance is relaxing, so he can wind down. Then he turns off the light when he’s ready to fall asleep.

This lamp has helped Chulengo build the foundation for the fondest for reading. Target doesn’t sell this lamp anymore, which is such a bummer. If I had to purchase another one now, I would pick this adorable wooden one from Etsy.

This lamp is less functional and more decorative and entertaining. It doesn’t actually provide much light, but it is a great replica of the moon. Chulengo’s favorite part about this lamp is that it comes with a little remote control that he can play with. By clicking a button, Chulengo can change the phases of the moon. He often puts himself to sleep, clicking through the moon phases.

One goal of mine, as we raise our kids, is to help them develop a love for reading. I feel like if a child loves reading, no matter what, their path in life will be a bit more stable. Our kids will develop more confidence, use reading as a relaxing tool, and educate themselves.

I Took The Moon For a Walk

On the Space Station (A Shine-A-Light Book)

I don’t know about your toddler, but mine LOVES to dress up. We even put a full-length mirror in his room because he loves to dress up and look at himself in the mirror.

Finding this astronaut helmet was a key piece of Chulengo’s room. He loves to wear it during playtime in his room. Heck, he even asks me to wear it as I read to him at night. It’s hilarious. Now, I just need to get him a whole astronaut costume. I’ve had my eye on this costume to take his costume game to the next level.

Quiet time has been an essential part of the day in our home. Chulengo spends time each afternoon in his room by himself. He can play, nap, or look at books. When I initially prepped his room, I didn’t want any toys in there to distract him from napping.

But I quickly learned that my toddler doesn’t always take a nap. And quiet time is much more enjoyable for everyone when he has items to quietly play with. So, I found a couple of different rocket-themed toys for him to play with: a rocket construction trio, galaxy magblocs, and a wooden magnet rocket kit.

Another favorite of Chulengo’s is this play telescope. There are little discs that fit inside the telescope and Chulengo can see pictures of planets and other space objects.

Can Chulengo tell time as a toddler? No way! But, I thought having a clock would be a great way to introduce him to time. I’ve started talking about the hands of the clock and what they mean. He’s catching on and realizes when the small hand reaches the seven, he needs to start getting ready for bed. I personally love this clock, because the little man swings side to side and it entertains Chulengo.

Putting this room together has been a real joy. Seeing Chulengo’s reaction to the room has been even better. He has space (no pun intended), in our home that is his. A space that can help him relax, pique his curiosity, and provide some educational stimulation.